REALISATION OF AN INTERVENTION

“My Roses in My City”

Mural Painting Project in the old area of Ankara in 2018

Which location in my town did I chose and why?

I have been living in Ankara (capital city) since I was born in here for and I have decided to make an art project in “Ulus” which is very old area located in the center of the Ankara. The name “Ulus” means “nation” in Turkish and this place has many historical sites like the first Turkish Grand National Assembly’s parliament building which is still standing in its original place and the oldest hotel where Atatürk had stayed “Ankara Palas” which is located across from this historical parliament building. Moreover, in the center of Ulus, there is a memorial called “Victory Monument” which was erected in 1927 as a symbol of the Turkish War of Independence. 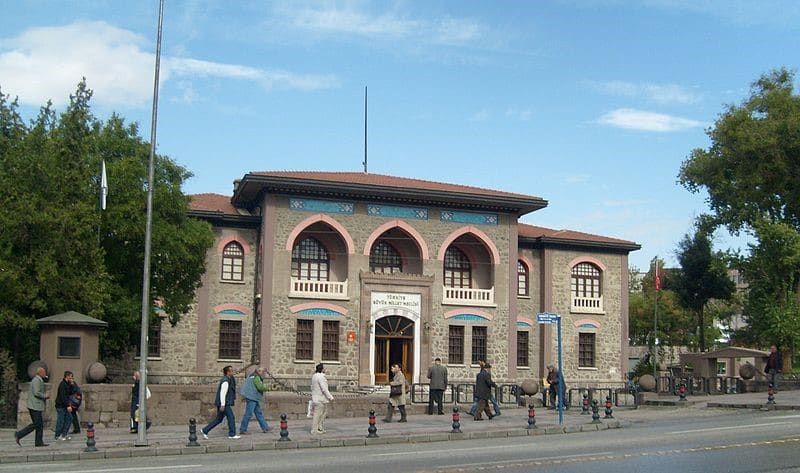 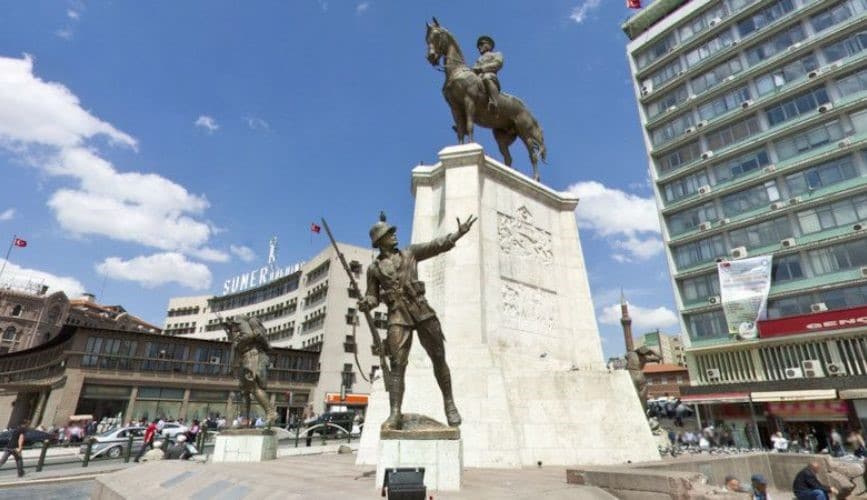 The reason why I choose this area for my project is that Ulus is not only what it seems in photographs, but also it has really different and rich structure at its background. The surrounding area of Ulus is beyond history with its own local people and artisans. Everywhere around Ulus is too old and almost tumbledown but there are still life. People are working under these conditions without caring what they are exposed to because these areas have such a soul that absorbing people into its own atmosphere. As a result, I decided to make a mural art with my usual sign “rose visual” that I use quite a lot on these places old walls.

Initially, I drew some rose sketches that I always do and I scanned them on the computer. After some correction on Photoshop, I requested my friend to draw over rose sketches on AutoCAD program for laser cut. Later on, I had rose stencils in 35*50cm sizes and also, I printed the same rose sketches on transparent paper. The reason why I also took hardcopy of the rose sketches is that, I could not be sure if the people allow me to paint their place’s wall. In this case, I would use rose prints to put in front of their walls and take a photo. As a result of it, this happening would be “temporary” depending on the local people or they would want me to paint on their wall. So, the process of this mural project is also up to local people’s decision as well. 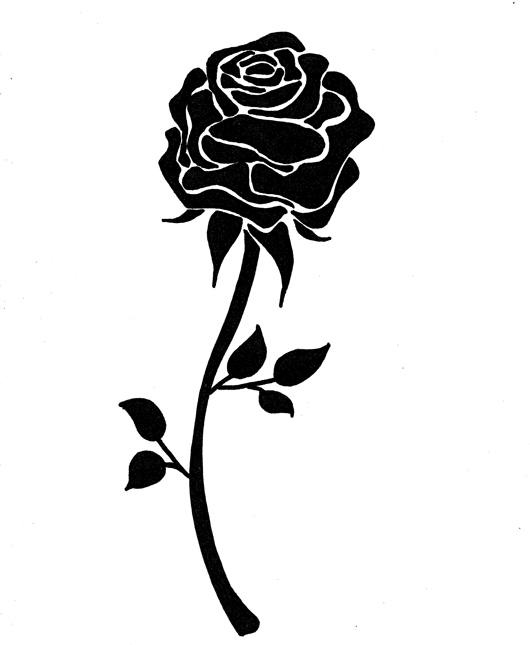 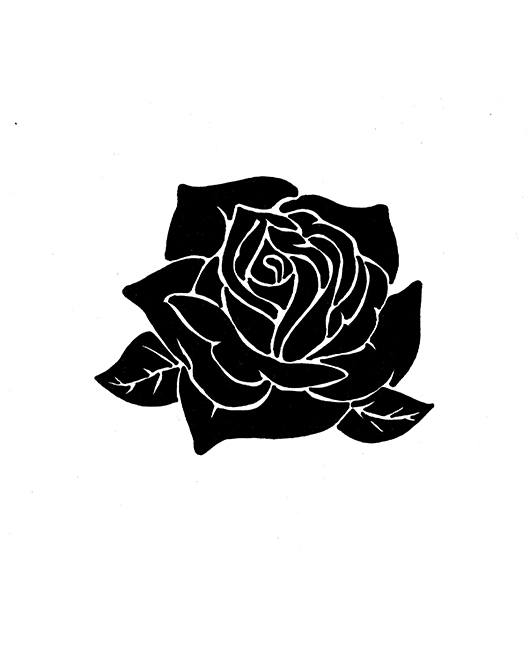 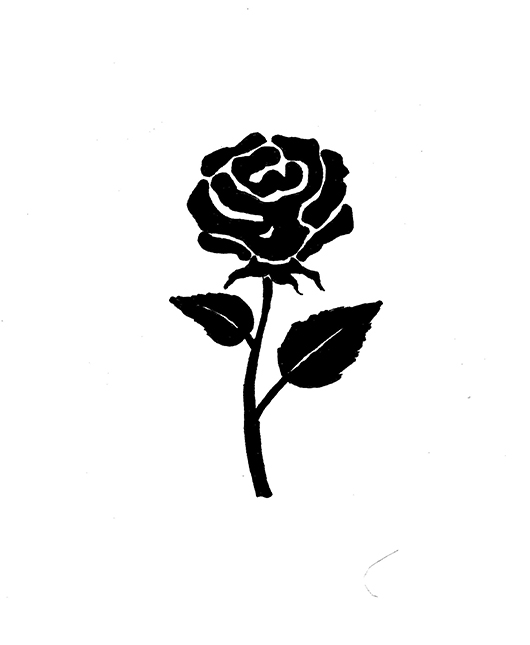 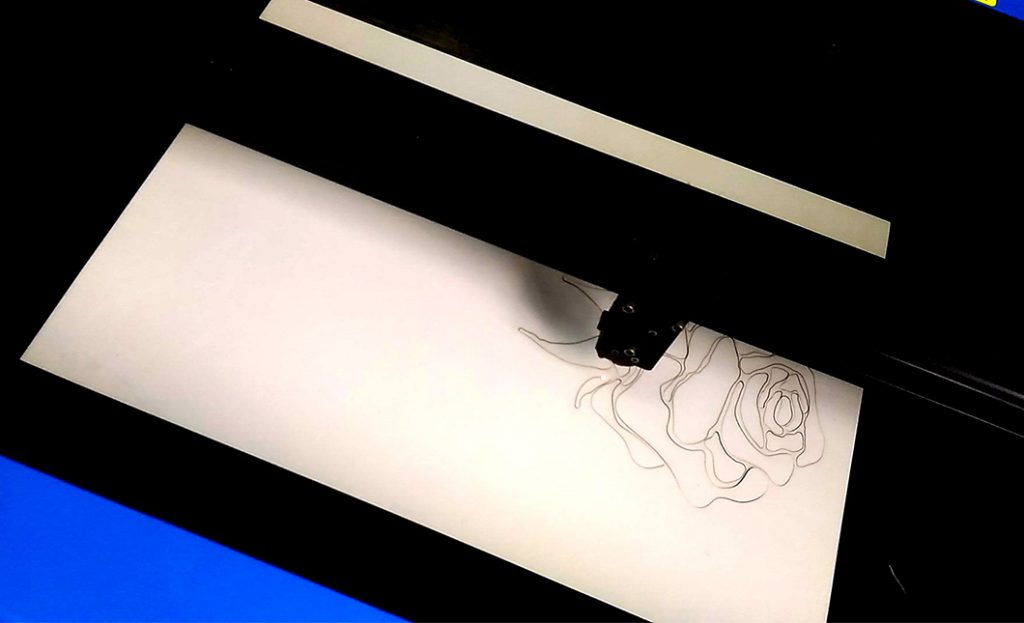 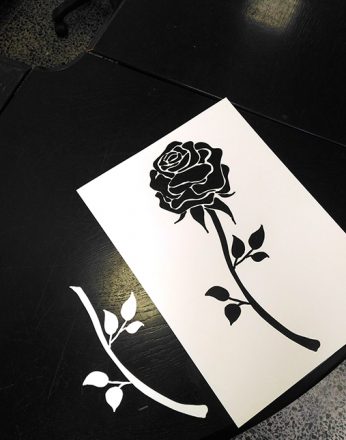 Process and the Impact that My Artistic Intervention 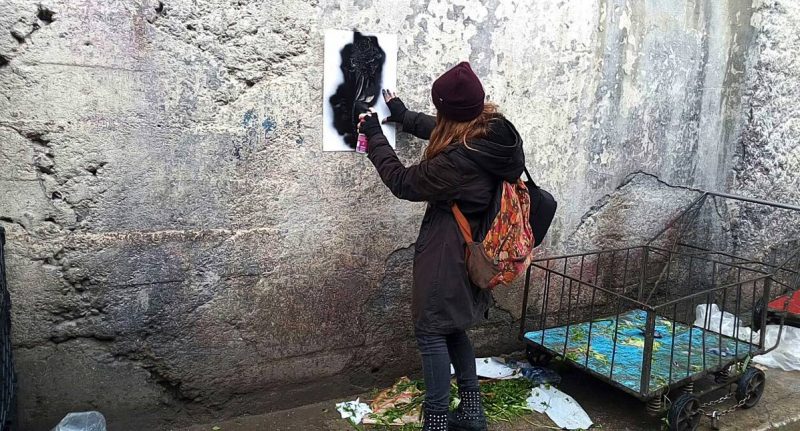 I did my mural paintings when the weather was very rainy and windy. In spite of the weather, it was a quite productive day for working and it took almost three hours to discover appropriate sites and paint. What is more, it was so surprising that everyone allowed me to paint on the wall of their places. I did not know firstly how local people’s reactions could be because it’s really difficult to predict in advance. Before painting, I got permission to take a photograph and requested if I can paint a rose on their walls. Everyone was so willing to share this experience with me. They always asked me why I paint a black rose and all of them appreciated what I was doing there.

For me, rose symbolizes the power of femininity, the beauty of nature, passion of love, divinity, spiritual enlightenment, and wisdom. It is a common symbol which differs from many movements to beliefs and it has extensive significances depending on cultural, religious and regional features. Moreover, I realized that in English “rise” word’s second form is “rose” and there is a strong metaphorical meaning even if just being a single word. It is like being born and grows; improving and sparkling. Correspondingly, I want to enhance the power and beauty of femininity and exhale my sensations as a woman via my artworks. That’s why I went to around Ulus where mostly male workers and artisans struggle to make a living in dirty places. It is possible to smell labour power which is lack of woman existence throughout the streets. Everywhere is just males, everywhere. 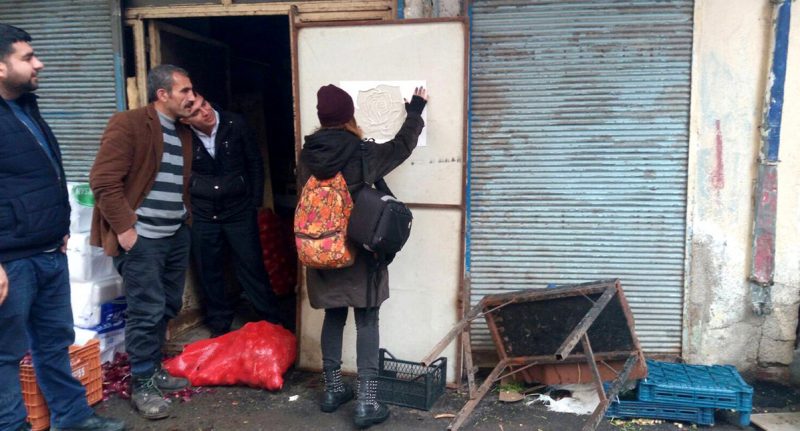 One of the favorite moments that I had during my mural painting experience is in this photograph. After I got permission to paint, the man with a brown jacket kept asking me why I am doing this and I could not reply him. I was just smiling because the other people replied him instead of me. They said, “it’s a sign that you should buy a flower for your wife”. 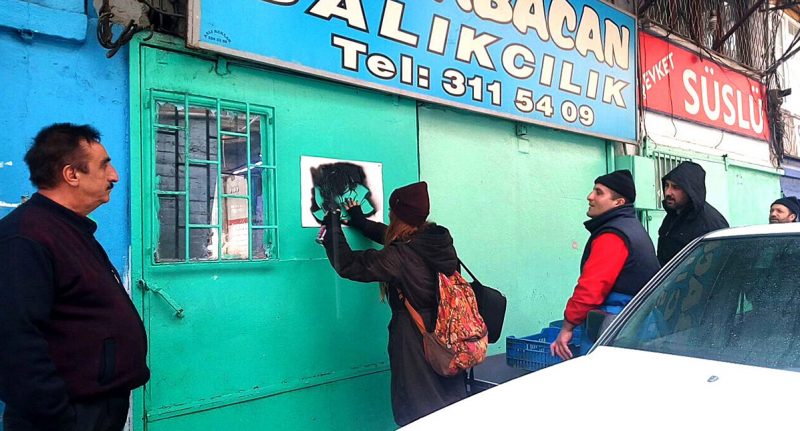 While I was painting, some trades came and asked me if I paint their place, too. In this photograph, a fisherman wanted me to paint a rose on his work place’s door. There are also two rose paintings across the door on the street. While I was painting, he said, “flowers have just bloomed on our street”. 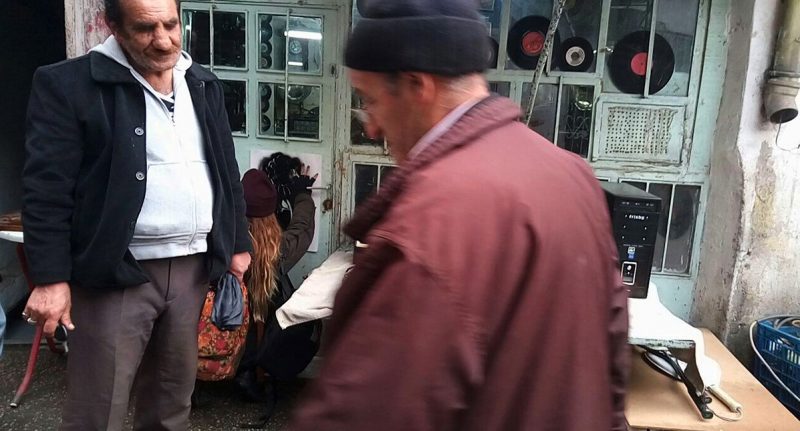 The reason why I choose this noble and serious color black is that, obviously the position and the value of women in Turkey. Black often represents the emotions and actions of rebellion; mourning, death, grief and sadness.  But it can also represent both the positive and the negative. While my roses are enhancing the power of femininity, black is also empowering the meaning of it by associating with rebellion, and seriousness. Now, a touch of a woman bursts out in the streets where men are living without an existence of women.

As a result, it was a great experience that I have ever had. My intervention was not only up to me. It was also depend on the people around me. My roses would be temporary artworks but it became permanent with the circumstances. I painted some abandoned and ruined places, too but I would never expect that people give me permission directly to paint their walls and doors. During my process, I thought about that moment and future because being a woman in such world is like never know about ocean deeps and infinite space. However, it was my first attempt for making art in a public space and I believe that with the proper conditions and more discipline I will be more expressive and successful in future. 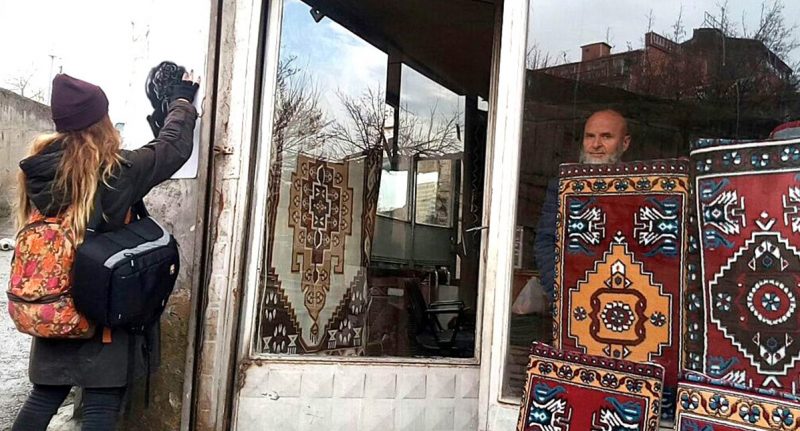 One of the hardcopy that I did not need to use